Animal terms and animal references are prominent among Wall Street slang terms. Here’s a look at bulls and bears, hawks and doves, cats and dogs, sheep and pigs, and even black swans and unicorns. 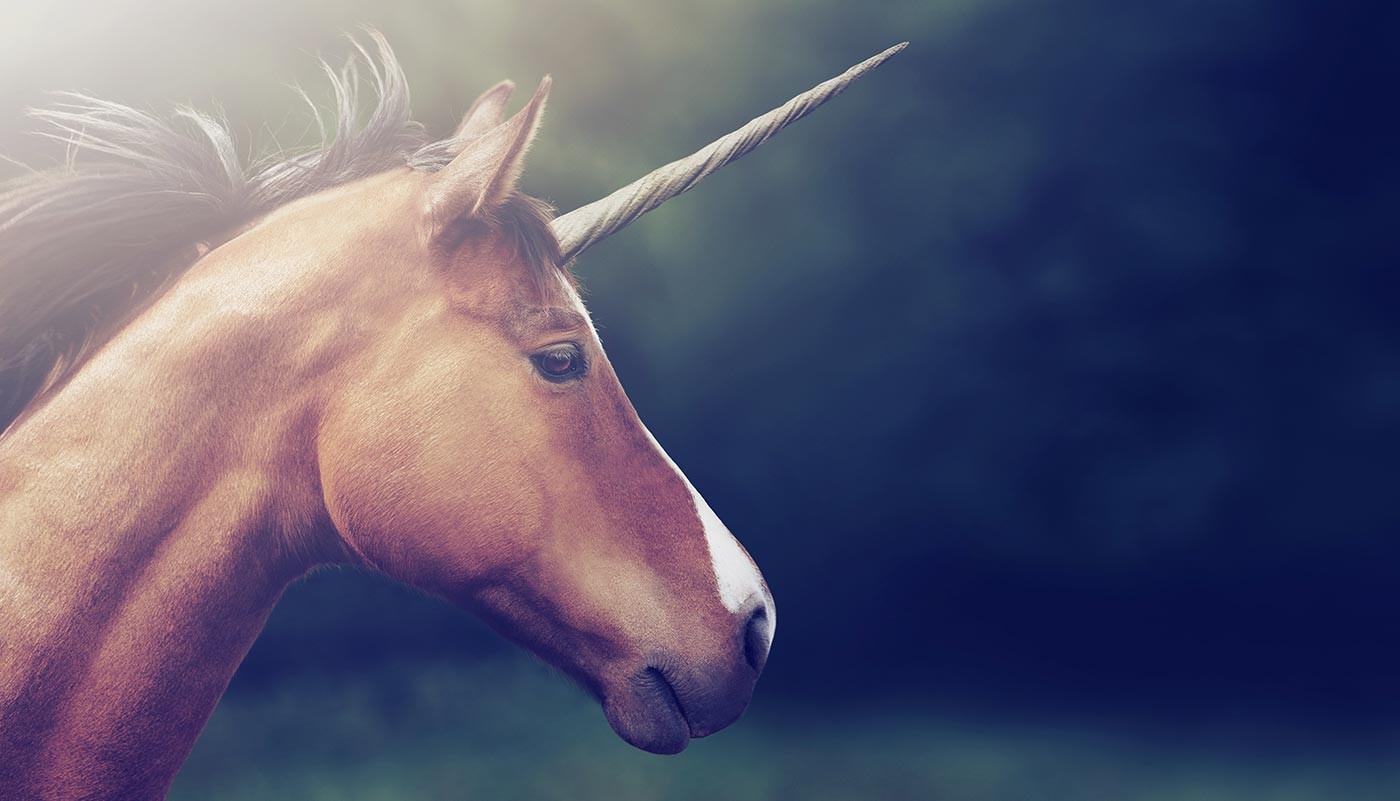 Someone turning on the financial news for the very first time might get the impression that Wall Street isn’t a market but rather an animal parade: bulls and bears, hawks and doves, dead cats and doomed sheep, and so on. Stock market animal references reach back to the early days of Wall Street. But what exactly does all the animal-based market slang mean?

Charging Up and Forward: Bulls and Bull Markets

Bulls are considered optimistic on stock prices or the overall market and therefore may be buying, or “going long.” Bull markets are typically defined as a period of sustained, fundamentally driven growth in share values, although it’s not always certain when a bull market began until years later (the ongoing bull market in U.S. stocks started in early 2009, based on benchmarks such as the S&P 500 Index).

The origin of the term “bull” isn’t clear, although real bulls—adult male cattle—can have sharp, upward-pointing horns and can be aggressive, hard-charging, and powerful. The term “bull” was used in association with the markets as early as 1714, according to the Museum of American Finance.

In contrast to bulls, bears tend to be pessimistic and expect stocks to decline, and they may sell shares they’ve been holding. Bearish traders may also “short” stock by selling borrowed shares they intend to buy later at a lower price, looking to pocket the difference at a profit.

A bear market is commonly defined as a drop of 20% or more and may “coincide with a weakening economy, significant liquidation of securities, and widespread negative investor sentiment,” Campbell said.

Market historians believe “bears” arrived on Wall Street before “bulls.” The bear term dates to around 1709, when it was used as shorthand for the “bearskin jobber” occupation and may have referred to the practice of “selling bearskins before catching the bear,” according to the Museum of American Finance (kind of like what short sellers do today).

Another theory holds that bull-versus-bear symbolism originated in London around the time of the 1853–56 Crimean War, in which Britain, personified in political cartoons as “John Bull,” fought Russia, often represented as a bear, according to Liberty Street Economics, a blog published by the New York Federal Reserve. (Russia lost the war.)

Not Flocking Together on Interest Rates: Hawks and Doves

If you’re a dove, or you’re “dovish,” you likely favor “easier” monetary policy and lower interest rates in hopes of stimulating the economy.

Animal lingo isn’t limited to stocks. Several options strategies are named for winged creatures. Butterfly spreads, condors, and iron condors are among options strategies that aim to profit through the passage of time or through changes in volatility (or lack of change).

A long butterfly spread, for example, uses options contracts based on a 1:2:1 ratio, where the single options on the outside are long positions, or the “wings,” and the two options in the middle are short, making up the “body.” The shapes of their risk profile graphs resemble winged creatures, with the butterfly having a more pointy head than the condor or iron condor. 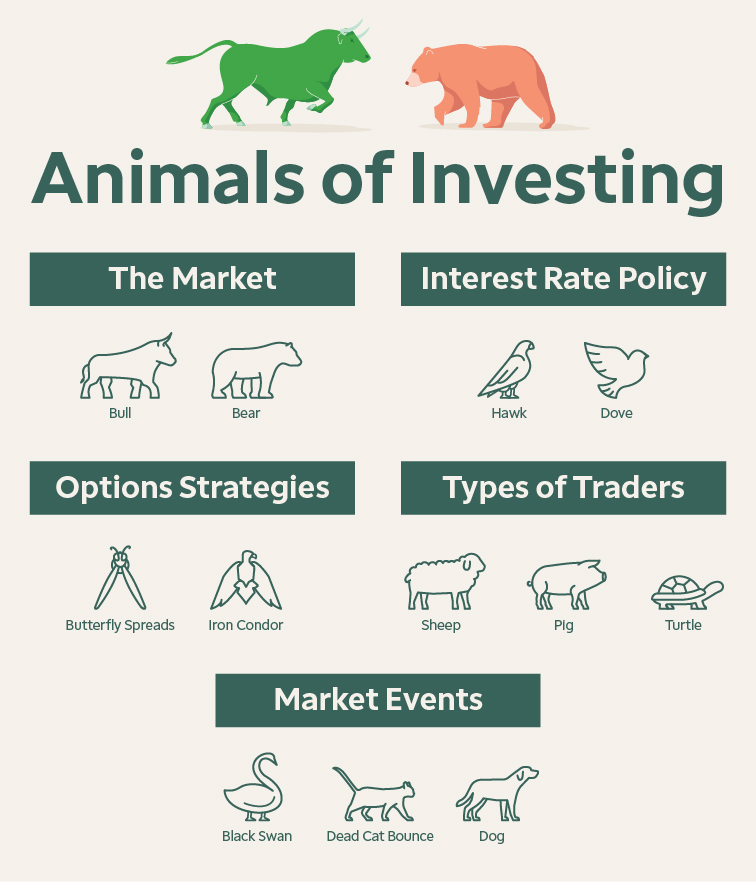 Appetite for Destruction: Sheep and Pigs

Investors lacking discipline, focus, or strategy, who may blindly follow the herd without thinking independently or critically, are sometimes derisively called “sheep.” They’re considered late to market moves and vulnerable to bad advice, in contrast to more seasoned market professionals. Sheep “get slaughtered,” as one Wall Street axiom goes.

Can humans be taught to trade successfully, or is that a special gift some people are born with? That was a central question in a 1980s experiment led by legendary commodities trader Richard Dennis and his partner, William Eckhardt.

A basic premise in “turtle trading” is that markets move in identifiable trend patterns, including uptrends (bull markets), downtrends (bear markets), or neutral trends (range-bound markets). Ergo, “the trend is your friend.” Dennis was widely regarded as a trend-following trader, and he believed his experiment results proved that trading is a skill that can be taught.

Man’s best friend? Not on Wall Street. “Dogs” are stocks considered to be poor performers or underperformers compared with industry peers or the broader market.

Cats are also represented. A slumping stock may see a “dead cat bounce” that turns out to be little more than a temporary respite or head-fake before the downtrend resumes (as the saying goes, even a dead cat would bounce slightly if dropped from a sufficient height; some trace this expression to 1980s British financial markets).

How can traders distinguish between a dead cat bounce and a potential actual price reversal? Some people study technical patterns on stock charts for “confirmation” signals.

Perhaps the scariest animal in the Wall Street zoo, black swan applies to outlier, extreme-impact events that people know can happen, yet are never prepared for. The 2008 collapse of Lehman Brothers, the May 2010 “Flash Crash,” and the 2016 Brexit vote are considered black swans. The term was popularized by Nassim Nicholas Taleb, a finance professor, writer, and former Wall Street trader, in his 2007 book The Black Swan: The Impact of the Highly Improbable.

A black swan event is very difficult to predict. But there are steps investors can take to prepare for market turmoil and insulate their portfolios. For example, keep an eye on indicators such as Treasury yields or the Cboe Volatility Index (VIX) for signs of escalating concern among market professionals. The VIX, known as the “fear gauge,” often spikes higher during periods of market or political tumult.

We’ll close this journey through the stock market zoo with an animal outside the real world: the unicorn.

A relatively new term, a “unicorn” is a privately held startup company, often in the tech industry, valued at more than $1 billion and potentially destined for even greater riches after an initial public offering (IPO). In recent years, some of these unicorn companies have indeed held IPOs to much fanfare, only to see their shares sag. Could a hot new ride-hailing company or social media platform actually turn profitable and become a solid, long-term investment? Or are unicorns just a myth? Perhaps a little of both?

The information is not intended to be investment advice. Examples presented are provided for illustrative and educational use only and are not a recommendation or solicitation to purchase, sell or hold any specific security or utilize any specific strategy.

All investments involve risk, including potential loss of principal. Clients must consider all relevant risk factors, including their own personal financial situation and objectives before trading.

Markets are volatile and prices can decline significantly in response to adverse issuer, political, regulatory, market, or economic developments.

Past performance is not an indication of future results.

Trading in securities during or just after the IPO can be extremely volatile.

Options are not suitable for all investors as the special risks inherent to options trading may expose investors to potentially rapid and substantial losses. Options trading subject to TD Ameritrade review and approval. Please read Characteristics and Risks of Standardized Options before investing in options.

Investor's Manual: What Is a Stock?

Learn to Invest: Your Goals, Objectives and Investment Products